June 04, 2012
I love ghost signs. These messages from the past are one of my favorite parts of the urban landscape. I get overly excited every time I discover a new one.

Ghost signs (aka fading ads or brick ads) are old hand-painted signs that were painted directly on the walls of buildings. In the late nineteenth and early twentieth centuries, advertisements were painted onto walls by skilled sign painters. As new types of ads have all but replaced the old art of sign painting, sign painting is a vanishing occupation. These ads are typically faded as most date to before the 1960s, and many have survived much longer than that. There is a lot of information on ghost signs in western Europe and the US, so I will move on to the ghost signs of Eastern Europe, particularly of L’viv and Galicia.

I’d say ghost signs in Galicia differ quite a bit from those in western Europe and the US. I have noticed that in the West, ghost signs are most often found on the sides of brick buildings and advertise a brand of a product, while in Ukraine most (at least most of the ones that are still around) were painted on the front of stores to advertise what products were for sale. Most examples still visible advertise food items like cheese, butter, tea, etc. Others include shoes, hats, school supplies, footwear.

Another interesting feature of L'viv's hand-painted signs is the presence of painted stripes, usually black and yellow, but sometimes red and white, black and white. I’ve had a difficult time trying to learn the function of these stripes, but on one blog I was told that the stripes designated stores in Austrian times (L'viv was part of the Austrian empire until 1918) that were allowed to be run by Ukrainians and Jews. 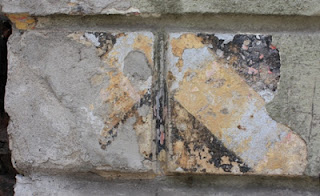 Also another difference worth mentioning is the history of the region in compared to Western Europe, in particular the Soviet history. The majority of hand-painted signs were plastered or painted over when the Soviets took power. I think one reason was to eliminate the presence of any language other than Russian from the urban landscape (until 1939-ish, signs were generally in Polish, German, or Yiddish, and very few in Ukrainian). And the other major reason is likely because most of these stores or brands or whatever was being advertised ceased to exist. So for almost 50 years most of these signs were hidden under layers of paint. An interesting phenomenon is how these signs are being uncovered. As Lviv is changing, the buildings renovated, many of these signs are being discovered. Unfortunately, most of them are only exposed to the public for just a few hours until they are repainted and lost again. (But fortunately, some are preserved)

Also, plaster and paint is crumbling from many buildings, so one can find many parts of signs, a few letters, a few words. But in addition to time and weather, there are also curious people who take it into their own hands (literally) to liberate these signs and reclaim the pre-Soviet history – de-Sovietizing the landscape, as I like to call it.

Another interesting phenomenon (which is also fairly common in ghost signs in Europe and the States) is multiple-layered ghost signs, that is, when even older signs are visible under the newer layers of paint. 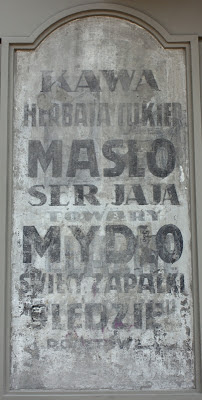 And I'll end this post with another one of my favorites. But it is starting to crumble: the barrels on the right side are almost all gone now :(

Another post on Lviv's ghost signs can be found here.