Showing posts from July, 2012
Show all

I started noticing some strange-looking metal things near some doors in Lviv. I didn’t know what they were until I visited Przemyśl, Poland, last summer, and my friend Sarah told me what they were.
Boot scrapers in cities hark back to a time when urban roads were dirt. Thus the bottoms of people’s boots became very muddy and filthy. Solution – place metal boot scrapers near front doors of buildings so people can clean their boots before entering.
Boot scrapers have become (for the most part) obsolete as roads have been paved.
There are many different kinds of boot scrapers, but in Lviv I’ve only found free-standing boot scrapers, which are usually located just to the side of front doors of buildings. But I have also come across a few that are located right inside the main door to a building.
For some reason I really love boot scrapers! 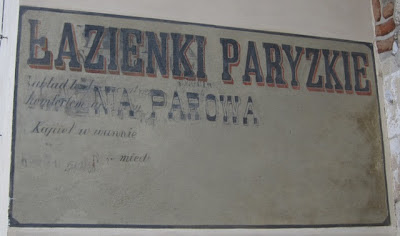 Last weekend I was in Krakow, Poland, and found some pretty interesting ghost signs – some restored, some not, some possibly made to look like restored ones. They are pretty similar to ones in Lviv, which is not strange as Krakow and Lviv had pretty similar histories: they were both cities in the Kingdom of Galicia and Lodomeria – a crownland of the Austrian Empire – and then both were part of Poland during the interwar period.