The vocabulary (which I wrote about here and more recently here) and accent of the diaspora community in North America (specifically the community that descended from the third wave of immigration (1940s-50s), many of which came from Galicia) differs somewhat from the vocabulary and accent heard today in western Ukraine. In the diaspora this vocabulary and accent remained rather stagnant while in Ukraine due to various factors (such as Russification and just due to the natural evolution of languages), the language, both its vocabulary and the sound, has changed. Thus the language spoken in Galicia before WWII has been better preserved in the diaspora than it has in Ukraine (in western Ukraine it can be heard only a little in rural areas/from the oldest generation.)

The Ukrainian Historical and Educational Center of New Jersey has on its website historical audio recordings where the early 20th century Galician dialect and accent can be heard very well, for example, in a lecture by a noted Ukrainian-American lawyer, journalist, and community activist Semen Demydchuk:

"While the lecture is interesting for its content, it is also a fascinating linguistic document. Demydchuk speaks with a very strong dialect characteristic of early 20th century Galicia, an accent which has practically vanished in Ukraine, but which can still be heard occasionally in a more diluted form among descendants of some Ukrainian immigrants in the US and Canada. Notable phonological features include the substitution of "e" for "y" and the addition of "w" to the genitive adjectival ending "-oho" (so that "syn'oho" - "[of the] blue [one]" - would sound like "sen'ohow")."

As an American who has lived in Ukraine for several years now, I have noticed several other features of the language spoken by Ukrainians in the third wave diaspora community and how it differs from that which I hear in Ukraine. Thus below are some of my observations on the pronunciation, stress, and accent of Ukrainians in North America. (I'm not a linguist so these are just my observations and not a linguistic study. And I'm not getting into the history of the language and its changes — rather I just want to point out some of the characteristics of the diasporan sound.)


Stress
First of all, there is a difference in stress, which changes the sound of the language. In the diaspora we tend to put the stress on the first syllable in certain categories of words (a characterstic of south-western Ukrainian dialects) while in Ukraine today it is standard to have the stress on a latter syllable.

Here are some examples:


Extra й sound
We pronounce the words "дванадцять," "тринадять," and so on with an extra "й" sound so that it sounds like "дванайдцять." Today this is heard only among the older generation in western Ukraine, particularly in villages (and thus one of the reasons people tell me I sound like their grandparents). It's been quite difficult for me to drop the "й" sound so I've continued to do this.

Another substitution is "w" for "l"; for example, the word "сказала" I've heard pronounced "skazawa." However, as opposed to the substitution for "v" which I hear from many diasporians, I only heard this from a few representatives of the oldest generation.


СЬ and Ц sounds
In the diaspora, "сь" and "ц" are pronounced a bit differently than in Ukraine (something else heard in the recording posted above).

I think this is still somewhat present among the older generation in the villages of Galicia. But I wonder if this is also an influence of English.

And now after living in Ukraine for several years and getting used to the sound of the language in Ukraine, this is this first thing I notice when I hear Ukrainian-Americans speak Ukrainian.


Г sound
Foreigners and some diasporans (like me) have a hard time with the letter "г" as it has a different sound from the English "h." I have no idea whether this letter was pronounced differently in Galicia at one point or whether this is just an influence of English. In Polish, however, they also don't have the Ukrainian "г" sound.


Г-Ґ
I wrote about this in my first post about the diasporan language, but will include it here too. Since the letter "ґ" was banned under the Soviet Union, today it's very rare to hear this letter used in Ukraine. Though it's starting to come back in certain words. In the diaspora we always had this letter and so the sound is more common. For example, in the following words (which in Ukraine are said with a "г"):
ґудзик
ґітара
ґазета
балаґан
ориґінально

И-І
Another difference that can be heard in the diaspora (and in some dialects in western Ukraine) is "и" in place of an "і" in certain endings.

This isn't directly related to accent, but I'd say it influences the sound of the language. In Galicia it used to be more common to have the reflexive pronoun separate and often before the verb, as is found in Polish. Today, the only phrase that is widespread with this in Ukraine is "як ся маєш?" (how are you?) and "Христос ся раждає" though other variations of this Christmas greeting seem to be more common in Ukraine such as "Христос народився."

In Ukrainian, the reflexive pronoun usually takes the form of the suffix "-ся" or "-сь" or the pronoun "себе" which comes before the verb.

I wouldn't say ся + verb is very common in the diaspora anymore, though still probably more so than in Ukraine (except for in smaller towns and villages in western Ukraine were I still hear it sometimes).

And to underline the fact that the North American Ukrainian diaspora has kept a rather distinct accent, there is a journalist and satirist (“Майкл Щур”) from Kyiv who pretends to be from the Canadian diaspora and so speaks with the "typical" diasporan (old Galician) accent. For example, he шь's his сь's (e.g.,"вші" instead of "всі" and "якішь" instead of "якісь"). He also widely uses the reflexive "сі" and "ся" (e.g., "сі дивити" instead of "дивитися"). His accent can be heard in his news reports which are aired on Hromadske.tv and which can all be found on YouTube.

Here a few videos of his where his accent is heard:


An interview with Майкл

One of his more recent shows from Hromadske

Ukrainian diasporians of the world unite 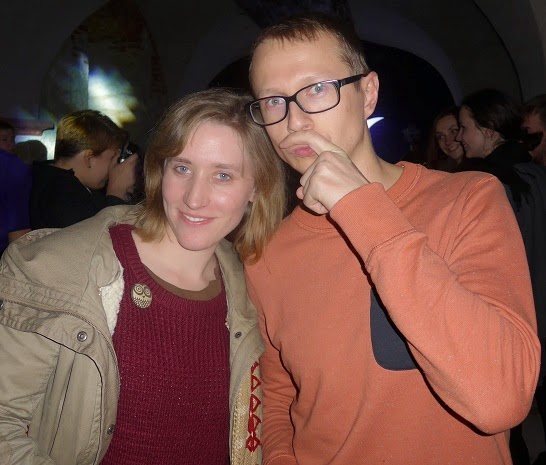 Amsterdam is beaming with hoisting beams. Previously I associated hoisting beams solely with old merchant's homes, but unlike other port cities where I've seen them, in Amsterdam they are found not only on the old canal houses, but all over the city, including on ordinary residential buildings. Due to fifteenth century planning laws, facades of buildings were built of lightweight materials with large windows to reduce weight. The smaller the width of the frontage, the lower taxes had to paid. In the seventeenth century, the city became more prosperous and thus wider, double-fronted merchant's homes sprung up.  The merchant's houses had attics and cellars which served as storage spaces for the goods that were transported by boat. Since the houses were so narrow, the stairwells were too steep and narrow, making it largely impossible to carry up goods or furniture into the home. Thus beams were attached to the gables in order to hoist up (with a pulley and rope) larg
Read more