My Ancient and Old-Fashioned Name

February 22, 2012
I thought a good place to start my blog was with myself, specifically with my name as "Areta" is an antiquated Ukrainian name, especially in Ukraine. The name "Areta" comes from the ancient Greek word “areté” (Greek: ἀρετή), which means virtue.

Likely one of the first Aretas to live in what is today Ukraine was a Greek woman who lived in the Greek settlement of Olbia near the Black Sea in the second century AD. In Olbia there is an ancient grave of a Greek couple Evrisivios and Areta – two famous residents of Olbia. 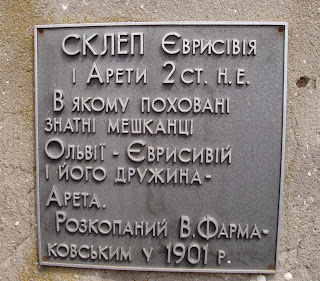 The name probably became a traditional Ukrainian name through the church calendar, from the Martyr Arethas of Omir who is commemorated on November 6.

The name is found in this list of ancient Ukrainian names:
АРЕТА — 6 листопада — (гр.) ЧЕСНОТА; Аретка, Аруня, Рута.
Although "Areta" has survived to this day, in Ukraine it is very rare. Most Ukrainians have never heard it before and are surprised when I tell them that it is in fact a Ukrainian name. The name is more common in the American Ukrainian diaspora.

I think having an archaic name suits me as I have grown to love all things archaic (well, everything except for old-fashioned views).
diaspora Galicia