January 11, 2014
When I was in Kyiv for Euromaidan, we went to the Lviv-themed restaurant Cupidon. Near the outside stairs that lead down to the restaurant, I saw this antique Lviv-made junction box. For a moment I thought it had always been there but soon realized it was put there specially - once I entered the restaurant, I realized that the theme was Lviv. Also, it is unlikely that items manufactured in Lviv would have been used in Kyiv, as at that time (most likely the interwar period) Lviv and Kyiv were in two different states: the Commonwealth of Poland and the Soviet Union. 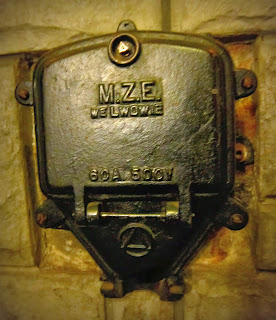